Sustainable fashion, also called eco fashion, is a part of the growing design philosophy and trend of sustainability, the goal of which is to create a system which can be supported indefinitely in terms of human impact on the environment and social responsibility.

It can be seen as an alternative trend against fast fashion.

Sustainable fashion came into the public foray in the late 1980s and early 1990s as well-known companies such as Patagonia and ESPRIT brought “sustainability” into their businesses. The owners of those companies at that time, Yvon Chouinard and Doug Tompkins were outdoorsmen and witnessed the environment being degraded by increased use. They commissioned research into the impacts of fibers used in their companies. 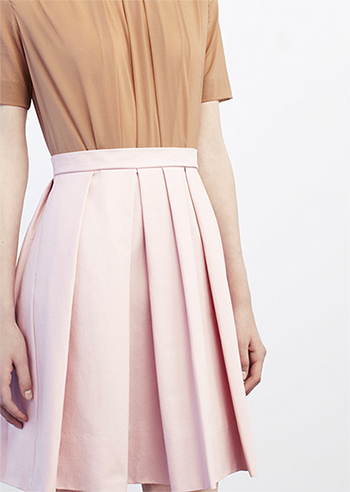 For Patagonia, this resulted in a lifecycle assessment for four fibers, cotton, wool, nylon and polyester. For ESPRIT the focus was on cotton, which represented 90% of their business at that time. The principles of sustainable fashion as put forward by these two companies was based on the philosophy of the deep ecologists Arne Næss, Fritjof Capra, and Ernest Callenbach. The work of these companies influenced a whole movement in fashion and sustainability. They co-funded the first organic cotton conference held in 1991 in Visalia, California. ESPRIT ecollection, developed by head designer Lynda Grose, was launched at retail in 1992 and was based on the Eco Audit Guide, published by the Elmwood Institute.

Patagonia made a commitment to recycled polyester in 1992 and a company wide commitment to organic cotton in 1996. Both communicated their action for “sustainability” through point-of-sale materials, catalogues and PR. Both supported the work of The Sustainable Cotton Project, which ran farm tours for fashion industry professionals to meet directly with farmers growing organic and IPM cotton in California. Both companies contributed to the US NOSB standards to include organic fiber as well as food.

The movement in sustainable fashion broadened to include many brands. Though the primary focus has remained on improving the impacts of products through fiber and fabric processing and material provenance, Doug Tompkins and Yvon Chouinard were early to note the fundamental cause of unsustainability: exponential growth and consumption. ESPRIT placed and ad in Utne Reader in 1990 making a plea for responsible consumption.

Patagonia has since made headlines with its “Don’t buy this Jacket” ad in The New York Times. According to Earth Pledge, a non-profit organization committed to promoting and supporting sustainable development, “At least 8,000 chemicals are used to turn raw materials into textiles and 25% of the world’s pesticides are used to grow non-organic cotton. This causes irreversible damage to people and the environment, and still two thirds of a garment’s carbon footprint will occur after it is purchased.” With the average American throwing away nearly 70 pounds of clothing per year, the fashion industry is the second largest cause of pollution worldwide.

This error message is only visible to WordPress admins